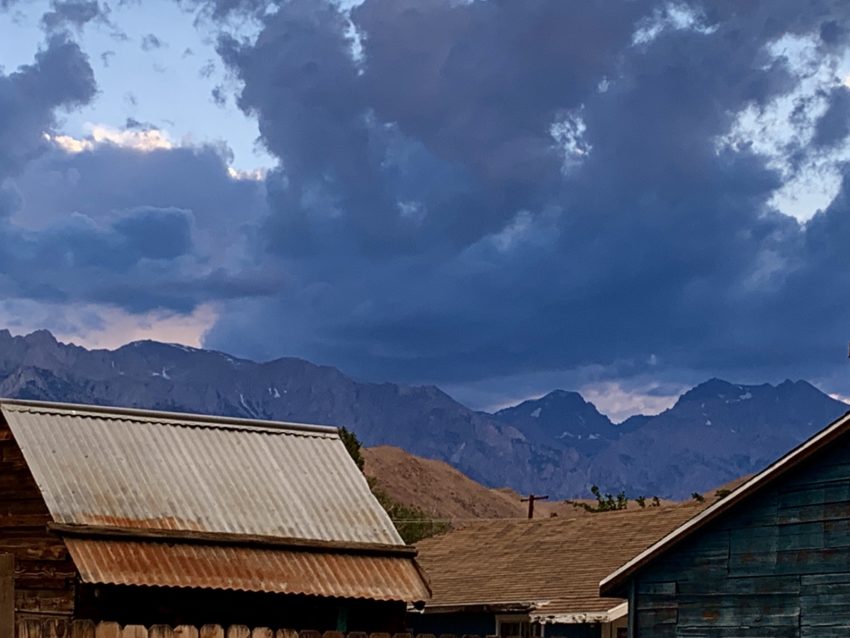 Lost&Found arrived in the dark after the mosquitos went to bed … lucky for him. When I set up camp and got water I got eaten alive. One of the buggers slipped into the tent and was just waiting for me to uncover my face in the morning!! Bites everywhere …

Again the plan was to hike 20 miles. I am starting to realize that it is pretty draining and not all that much fun to push all day just to make the distance … so I think I’m going to plan for 15 miles a day for the next section. More time to enjoy the upcoming views!

The terrain was similar with rocks and sand, and some views of meadows. There was some cell reception at Cottonwood Pass.

After uploading pictures, I turned around and a big black cloud had come up behind me. I thought I just hike on. After 5 min I took shelter as it started thundering and raining. Sitting under a tree, a wolf even walked up, and only turned and disappeared when he realized I was there. It didn’t look like the coyotes I have seen before (larger, more grey) but who knows!

Then it hailed. I thought it would pass but slowly all sides of the horizon filled with storm clouds. And they did not pass, the thunder was loud and lightning started. So I figured it was a sign to hike down to Horseshoe Meadow campground and go into town. Even on the hike down I had to stop and shelter, taking out my groundsheet to keep the hail and rain off. The thunderstorm continued for 2 hours.

The campground was evacuated yesterday after the earthquake but I’m not sure why. There are no rock walls and it’s in a flat meadow. The road is closed at the gate so it took a while to walk there. I found a ride instantly from a hiker leaving. So now I’m in Lone Pine, organizing the next section.