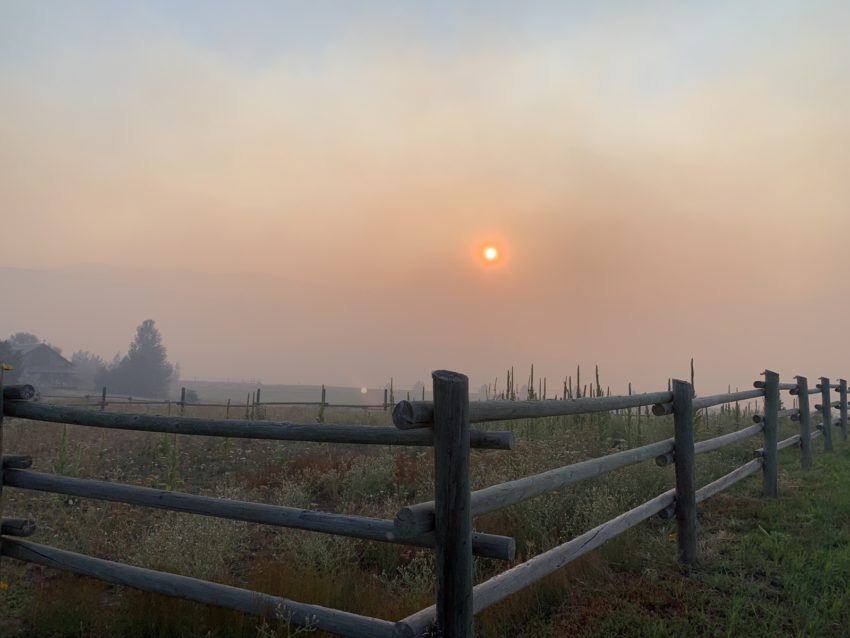 The valley has been affected by the Cedar Creek Fire which has been burning west of Mazama and closed Highway 20 last Monday (too close to the highway and the firefighters need room).

I went to the fire meeting in Mazama last Thursday (July 15), not knowing that the next day we would get our own fire right here in the Chewuch drainage. At 1:30pm on July 16, someone was apparently doing some welding on a ditch pump on the west side of the river and started the fire.

It ran up the slope which is mostly grass, into the areas with bigger timber. Apparently one house was lost in the Cub Creek area.

Within 6 hours, this fire was 2000 acres big, had crossed the river to the east side and headed north, south and east. I’m on the East Chewuch so anything burning south on the east side is bad news for me.

I was watching, assessing, waiting. Eventually State Patrol came by and told me I was on level 2 evacuation alert which means “Be ready”. I got my bags, dog stuff and cat carriers ready, keeping the cats both inside.

I communicated with Jae, Mark and the owner of the second horse here, Carrie who came up from Twisp to help.

We watched the air tankers go all evening and then watched the fire into the night, seeing lots of torching and flames.

She stayed for the night and barely slept; I tried to rest but it didn’t add up to a lot of hours either.

Carrie left Sat morning but is on call to come back and get the horses if needed. I have everything packed of my stuff and the few valuables that Jae and Mark want from the house (besides the pets). The cats and the dog can be “packed up” any time.

For now it is safe here … the house is surrounded by green pastures and neighbours who also have irrigated properties.

We would see the fire advancing and if that happens, I have places to go with the cats and the dog, and the horses would either stay on the pasture or be moved to Carrie’s place (moving is stressful for them so that’s a last resort).

Today, Monday, the cats and the dog seem a bit tired, just like me, but the horses are fine; they have been through this before.

Sunday and Monday were about the same: I wake up to air quality that is way beyond the normal scales (500-700 US AQI; today 48 Canadian AQI!) and only go outside with mask or respirator to feed the horses.

All other chores have to wait. Inside the air purifier is running and all windows stay closed. It’s really unhealthy to breathe in the smoke.

On Sunday I went up to Mazama when their air quality was “in the green” to get some exercise. This morning (Monday) the whole valley was unhealthy.

Typically the southerly winds start early afternoon, and then it clears the smoke. Today we went from 700 AQ in the morning to 9 AQ by 4pm!

The air traffic comes back when it clears, and there are often 10 or more aircraft dropping water and retardant onto the fire, all going directly overhead to reload.

But the winds also mean that the fires are blowing up. The smoke plume from the Cub Creek fire this afternoon was immense … some observers estimate 12,000ft high.

As of this morning it was 8255 acres big, burning up the Chewuch drainage and to the east.

The firefighters work really hard on the containment on the southern end, towards town and where I am. Let’s hope that works … I’m still packed and ready to go should the evacuation levels change. At the Cedar Creek fire in Mazama they ordered evacuations this afternoon along the west side of the valley.

A fire meeting is set for Wednesday afternoon in Winthrop. At those meetings, the incident team usually explains what they are trying to achieve, where they are working etc. Currently the west side of the Cub Creek fire is being worked on with dozer lines, trying to stop the spread there. The southern end on the east side has seen constant helicopter action, dropping water, and also some retardant yesterday. They are probably trying to stop anything that gets too close to the big farm there.

I will update this as things evolve. I am here until Saturday and am hoping things won’t get worse. The “hazardous” smoke levels are the most stressful as you can’t do anything outside and feel trapped.

I couldn’t help but think that Mother Nature just wanted to “get it over with” … last night, both fires covered a lot of ground. Checking the satellite view of Cub Creek, I had to zoom out just to see the whole fire. Overnight, it grew from 8200 acres to 32400 acres, all towards the north (no increased danger here). Amazing how it went right up to the old burn scars and took whatever timber was left. It will be running out of fuel up north so the firefighters are focusing on the west side for containment.

You can see how accurately the previous burn edges line the current fire:

My view out the window was the same this morning … nothing to see beyond 50m or so. I think the air quality values were at 500, currently down to 200 as of 2pm. However, there was clean air mid valley so I went for a run around Big Valley. The town is eerie; most shops are closed as you can’t really walk around outside without masks (don’t we know that already!)

The Cedar Creek fire really blew up last night as well, coming over Sandy Butte and into the valley. In the evening, the west side of the highway was evacuated and then Level 3 was even extended further down the valley towards Wolf Creek. Watching the live webcam from Mazama which was pointed right at the fire was scary. And today there is a red flag warning for more winds; let’s hope it pushes the fire up into high country, rather than down. A fire meeting is scheduled for tomorrow evening. I’m curious to hear their plans.

This afternoon, the evacuation orders along Highway 20 to Mazama were actually expanded; now everything north of the upper part of Wolf Creek road is on Level 3 – Get out immediately. The east side, Edelweiss, is on level 2. I made sure to call my friend Earl a few times today to keep him posted; I recently spent some time with him on his computer and was hoping that he had all the relevant websites open and refreshed. He’s not far from the current edge of Level 2 so I wanted to make sure he’s ready to leave.

A full day in pretty thick smoke, and the sun only came out for an hour at sunset. Mostly the air quality was through the roof again, 500-700, all outside time spent with the big funny mask to feed the horses and take care of their needs as well as the pastures and gardens.

But around sunset, I had one hour of sunlight and air quality in the single digits! I also went to the fire meeting and got some more information (and regular masks). This time they even had air quality experts as well as smoke movement experts … pretty interesting! Another guy (can’t keep their titles straight) informed us that pretty much all trails are closed in the forest and wildlife areas now, even if they are not near a fire. With the highway and pretty much all FS campgrounds closed, minimal tourism is expected.

The forecast for both big fires is that they are here for the long run, and only “season-ending events”, meaning snow, will put them out. All the time will be spent managing the spread and avoiding the fire burning down to the valley.

Back home now! It was nice to open the windows at night, breathe without mask and go cycling without any concern about smoke. I am always sad to leave Winthrop but I did need a break this time … It was a bit much to deal with. I keep following the fire news and hope that it doesn’t progress further towards town. If you’re interested in updates, please see the below links: