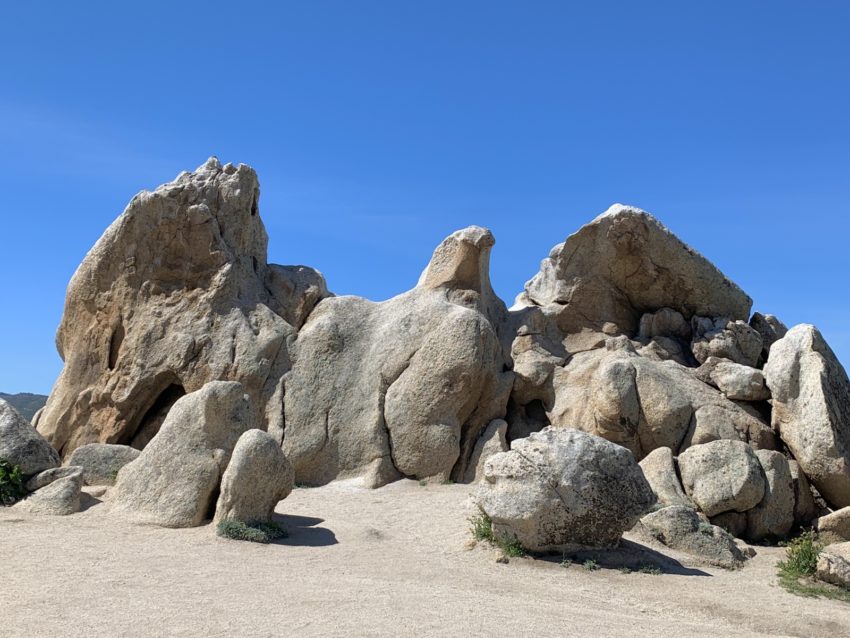 After a somewhat restful night (the fatigue overrules the traffic noise and lights as the cabin was right on the highway and only had a glass door!), I got myself ready for a ride back to Barrel Springs.

Mike had said that he would take Knockknock back to Scissors around 11 (dropping me on the way) so I had time, and the shop owner Kym mentioned she opens at 8am. The two of us and the other hiker (who was “sleeping off his hangover” according to Kym when we arrived) waited, looking for a coffee. But nobody showed up. At 9:30am I decided to hitch instead of waiting for Mike or Kym/coffee as there was no reason to sit around.

Drunk Hiker (don’t know his name but he was drinking beer this morning as well) and I found a ride to the trail and started the journey north (separately!). The trail went through wide open meadows and wound up some minor hills.

Finally I arrived at one of the icons of the PCT, the Eagle Rock! I took pictures, had my picture taken and took pictures of a hiking group from San Diego.

You could see far from up there (and yes it was very windy today again!)!

As I was heading down (towards Warner Springs) I got chatting with Glen the Aussie, part of the hiking group (all retirees from San Diego Gas & Electric) He grew up in Australia but got “stuck” in San Diego after college when he got offered a job at SDG&E. We ended up in great conversation the whole way to Warner Springs (3+ miles) – it went by in a flash!

Glen has travelled extensively since his retirement, exploring amazing trails and countries, and has many more adventures planned, such as driving all around Australia to all the furthest points (15,800 miles!!). Thanks Glen for the company!

The Community Center in Warner Springs is currently open for hikers so there was water, garbage bins, shade and a very nice guy called Joe who gave rides in his converted bus to the post office and elsewhere.

From there I started climbing along the Agua Caliente Creek for most of the afternoon. It was beautiful in many places, the setting only a gurgling creek can provide. Late afternoon I filled up all my bottles and climbed out of the canyon.

I’m camped in the Manzanita trees at about 4000ft. The wind has died down, and no other hikers are here (this space only fits one more tent). Bonus: cell reception! It is at 117.3 miles.

The next water source tomorrow morning will be 10 miles away (“Mike’s Place”; he has a water tank) so I plan to hike this early in the morning. I booked accommodation in Idyllwild for my first Zero (0 miles day) on Monday … and they include laundry! Can’t wait to get there and eat a salad 🥗

As I said last year as well (after some high mileage days), it’s actually a lot more fun to have time for more breaks, views and to meet people instead of just covering miles. It was still 16 miles or so today (with a late start) but a bit more manageable.