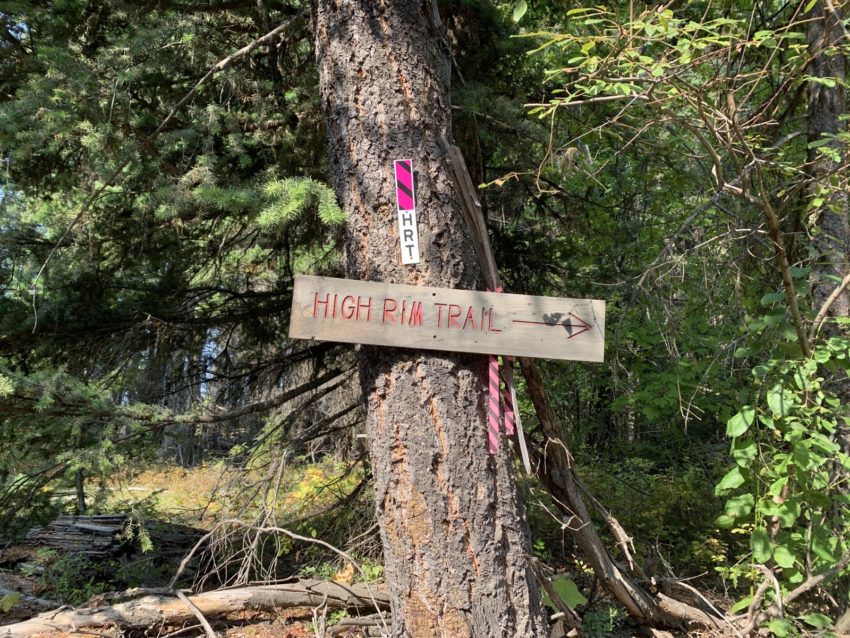 After an abandoned attempt about 7 years ago, I was ready to tackle the High Rim Trail again and also get some much-missed trail time in (it’s been a month since I finished the PCT).

The High Rim Trail in the Okanagan Valley runs from Highway 33/Mission Creek to Kalamalka Park in Vernon. It’s officially 58km long and goes through public lands as well as a Provincial Park (though I never figured out what/were the Wrinkly Face is).

Years ago we could not finish the hike due to many many MANY blowdowns that obscured the trail and made hiking very difficult. Back then we bailed at Oyama Road.

Yesterday and today I completed the full hike, only omitting Cardiac Hill which is the first few km’s from the highway to Goudie Road (recently burned and recently logged; trail hasn’t been recreated there).

My GPS recorded 31km on Day 1 (Goudie Road to the Monolith) and 21km on Day 2 (Monolith to Cosens Bay Road).

Overall I really enjoyed this hike! The first day had more mud than the second (it’s possible to step around it) but the view from the Grand View was spectacular. Too bad it wasn’t far enough for me to spend the night there as the flat tentpad and toilet make for a comfortable camp.

Instead, I hiked 31km to the Monolith and camped there. It is more open than a lot of other areas on the trail and provided a nice sunset and great moon rise! It was really bright outside all night, gorgeous to sleep under! One of the things I love about my tent is seeing the moon …

There is no water so you have to load up before you get there. Being at 1400m I expected a cool night but there was no wind and the night and morning were mild (estimate 7C at night, 20C high during the day).

Keyla (now 12 years old!) completed the hike like a champ. No complaints and lots of extra distance hiked (running back and forth). She sleeps outside the tent; her new thing is to curl up near the entrance of the tent and slowly, through the night, slip further and further under the tent 😁

I only ever heard a few trucks in the far distance in the evening, probably going to Beaver Lake or another one of the fishing lakes.

The second day had less access to water but also less blowdowns and more views.

Overall the trail is very well marked with many signs and flags, and mostly cleared of blowdowns. There is only one section on the first day that had bushy overgrowth.

The trail is mostly easy to follow; however, I found myself using the GPS app at many dirt road crossings as it was difficult to figure out which way to turn (when the trail didn’t just continue straight ahead).

The Okanagan High Rim Trail Association has done a good job with the signage and the clearing of the trail.

In quite a few places there are simple benches or seats cut into logs.

Most creeks that are substantial have bridges and only one required crawling across a fallen tree to get to the other side.

I did not see any other hikers or horses on the trail, nor any wildlife. The only people I saw were mountainbikers in the last 1km of the trail near Cosens Bay.