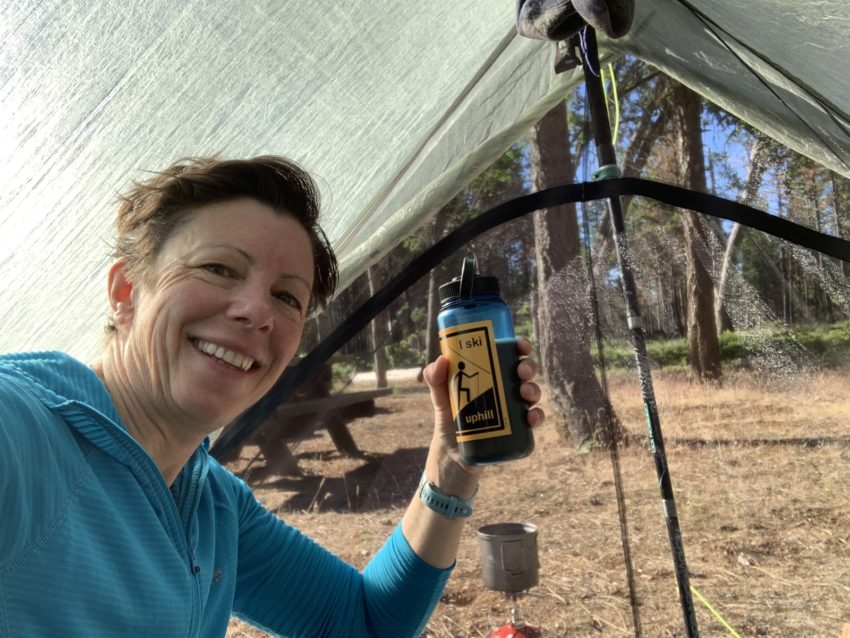 Happy birthday Heidi!! Glad to have had some cell reception today to wish my sister happy birthday!

The trail continued unremarkable, with the California heat still going strong. Towards the end of the day a “shortcut” to Burney Falls became more and more appealing!

I was lucky to then come across River and his almost-7 year old son River. They were actually going to Burney Falls anyway so it was an easy decision to accept the ride and jump ahead a few miles to the State Park. Father and son are from Utah and are on a road adventure, going where they feel like going and rolling a dice (literally) when they have options. Their pickup has a sleeping platform so they just stop where they want to for each night. River Junior was quite entertaining, telling many stories on a diverse range of topics!

In the State Park, camping is still closed but everything else is open. That meant ice cream and some people-watching as the falls seem to be very popular! They are gorgeous! And tall! If you zoom in, you can see a crazy person at the very top climbing down for a picture …

A short walk from the State Park is an established campground, not accessible by car since the gate is closed. How very luxurious! Immaculate bathroom with TP, running water faucet, many flat tent spots, picnic tables, garbage cans, cell reception … a paradise.

It even has bear boxes, even though I’m not sure how effective they are?? The garbage cans are also simple affairs with easily removed lids, so no challenge for any bears.

This was the perfect spot for come cleanup! There is no way around getting dirty on trail, though the terrain really makes a difference. Just walking in the forest keeps you pretty clean (besides some dust), while bush whacking ruins gear and any resemblance of cleanliness.

With the water and some gear hacks available, I feel pretty clean today! If you’re interested, here are some of those hacks … all ultralight:

When I got to the campground, I ran into another hiker, Ben. He’s going north but has only recently started. When I was getting organized he cut his finger pretty badly so I kept putting peroxide on it to clean it. He sat for a while putting pressure on it and it eventually stopped bleeding. Looks like he made it though the night 🙂